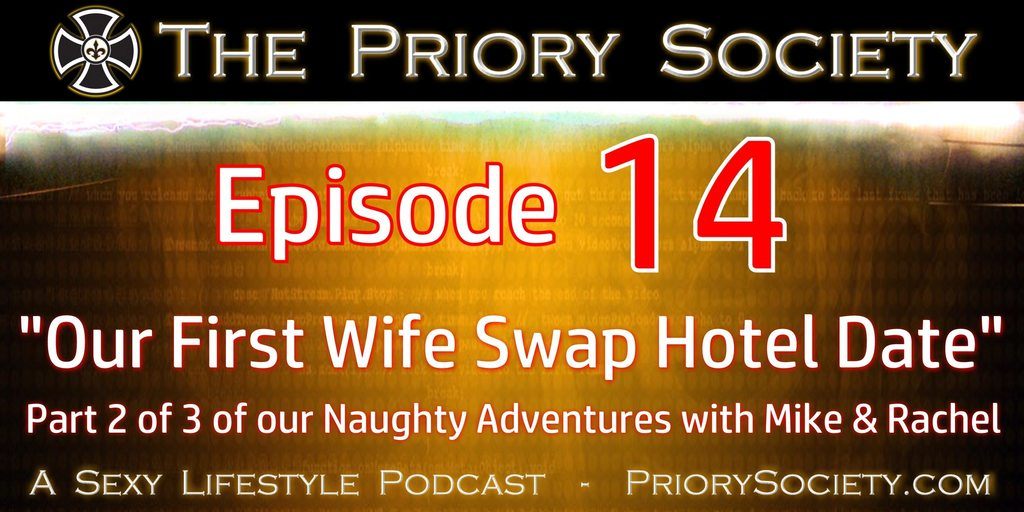 The Priory Society is a swingers podcast about sex, swinging, wife swaps & more.

​Date 1 - We met at a Wine Tasting at a fancy private club & had cigars. Isis & Mike got naughty in the bathroom.

Date 2 - We met at a hotel for a wife swap. It was a Soft Swap with oral sex but we each had "Oops Moments!"

Leather Bound Perverted Dictionary
"The Indecent Proposal Syndrome" The feeling that your spouse will be wooed away by another person that can offer them more amazing experiences than you can provide. This feeling is rooted low self-esteem & happens a lot in the Lifestyle but you rarely notice it because the person with the low self-esteem usually STOPS the entire process before it begins. They feel threatened. This person can feel a threat from a physical, emotional, or even a financial position. They may look at your pictures online & say nope, I'm not introducing my partner to that guy with that huge cock or any other reason.

But thinking that your partner may like somebody else... more than they like you ...is just silly especially when you're in a deeply committed relationship. We've noticed that it's mostly men that suffer from the "Indecent Proposal Syndrome." In nature, it happens with a simple observation of animals & how they are either a Predator & Prey. It's similar to the caveman mentality of who can provide for the woman in the best fashion. We subconsciously think about who can reproduce & create strong, good-looking offspring. It's almost as if you're challenging the closest alpha male to a dick measuring contest. You are trying to determine which one of you should sit on the throne? Who is the better & superior man? It's wise to tap into your caveman if you're getting attacked in an alley.  But it's pretty stupid to act "all macho" with another man if your goal is to do a wife swap.

We came up with this term based on a movie called "Indecent Proposal" released in 1993. The movie takes place in Las Vegas & Los Angeles. A struggling couple goes to Vegas to try to win some money to pay bills. (Demi Moore & Woody Harrelson) The dude is a shitty gambler & loses the bulk of their money. A wealthy businessman (Robert Redford) offers the struggling couple $1 million dollars for one night with the wife. After thinking about it they say yes. They wealthy dude takes the wife away from Vegas in a private helicopter and onto a yacht for a night of pleasure. The gambler husband drives himself crazy and his jealous attitude drives the wife away. The rest of the film follows the problems that arise and how they chose to deal with them. The end is very sweet and I won't ruin it for those who haven't seen it.

But check this out. If in the film, the lead couple were swingers...shit. They would've been happy as fuck. The wife sleeps with a wealthy dude and has a nice elegant meal and gets sexually serviced. The man gets a hall pass himself. The next day they're $1 million dollars richer. that's pretty badass. Cuckolds and men with Hot Wives, let other guys fuck their lady's for free. Many times the husbands even pays for dinner & for the hotel room. The single guy or bull, perhaps arrives with a six-pack of Pabst Blue Ribbon Beer or a 40 ouncer of Olde English 800 to share. And these couples are happy as fuck. It's just perspective.

Unfortunately, not allowing your spouse to have an amazing experience...robs them of a cool opportunity to perhaps fulfill a fantasy that they've had. Allowing your partner to sample other people sexually & emotionally could potentially to boost your own sex lives in general. Don't hold back your spouse because of your own inferiority complex.

SENTENCE: ​This dude developed the Indecent Proposal Syndrome & stole my Kettle Chips after our wife swap.

In the next Episode 15, we will share Part 3 of their story. That episode will consist of us describing our Full Swap Gone Wrong. That date did not end well when they argued & the guys broke out in tears. A few days later we met for drinks and to discuss the good, bad, & the ugly about our dates. We'll also give you 6 important takeaways that we realized from our sexual encounters with them. You'll then be able to use this information to improve your dates & play experiences. Tune into the next episode 15 to hear the complete story. That audio is coming in 24 hours.

ABOUT THE PRIORY SOCIETY
We’re Eros and Isis, a happily married mid 30's couple that leads a secret life as swingers. We love wife swaps & other sexual adventures with sexy couples. We started this podcast to help curious newbies navigate the lifestyle of having an open marriage and sexual non-monogamy. We invite you to discover your pleasure with the Priory Society Podcast

​Resources & things we mentioned in this show:

​Song we mentioned in the episode. "Are You With Me" by Easton Corbin

Sign up for Kasidie.com & get 30 days for free with our link
​Kasidie.com - Referred by LatinoSexyCouple

Friend us up on Kasidie
"LatinoSexyCouple" on Kasidie

All Music used in our Podcast is Original or Royalty Free

You can also reach us here:

We're Eros & Isis, a married couple in our mid 30's and we lead a secret life as swingers in Los Angeles, CA. Read our blog & listen to the Priory Society Podcast to hear all about our sexy adventures in the swinging lifestyle.